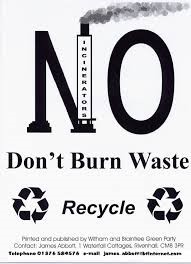 Reducing the use of plastic and creating a market for products that use recycled plastic, is the way forward. This is how I answered the Minister when it was suggested that we burn plastic, rather than sending it abroad for ‘recycling’.

“My Lords, I strongly disagree with the Minister and the fellow opposite—the noble Viscount, Lord Ridley—because although, obviously, we should not be sending plastic abroad, we should also not be incinerating it. To call incinerated energy green is nonsense—it is not green. I produced a report last year, a copy of which I think I sent to the Minister, saying that incineration was about to overtake recycling. Has that point been reached? Are we burning more waste than we are recycling?”

The Minister replied that we were not burning (by a fraction) more than we recycle according to the 2017 figures, which completely ignores the historical trend towards incineration and the 2018 increase in incinerator capacity.

Plastic is oil based and burning it is bad for climate change.