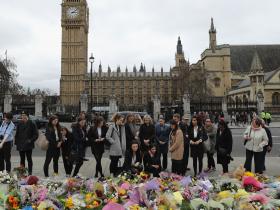 It is one year since the tragedy in which five people were killed and 50 injured, as Khalid Masood ploughed a 4×4 vehicle into pedestrians on Westminster Bridge and stabbed unarmed police constable Keith Palmer to death as he stood on duty outside the Houses of Parliament. We are marking these awful events at Westminster with a minute’s silence.

It is an appropriate moment to remember all those police officers who put their lives on the line to keep us, the public, safe. Two weeks ago I wrote to Cressida Dick, the Metropolitan Police Commissioner, to ask that she does something to improve the working conditions of the armed officers on duty here.

Over the past few months I’ve become increasingly concerned about the wellbeing and effectiveness of the armed officers who patrol the Palace of Westminster, both inside and outside. As the weather has got worse during the winter, two things have become obvious.

First, the welfare of the officers is under threat. Many have nowhere to shelter when it rains or snows, nor when the wind is strong. If they get wet during their two hour tour of duty, it’s almost impossible to dry out their clothes properly in their one hour off duty.

Secondly, cold, wet armed officers are potentially ineffective against a terrorist threat. Handling a weapon with cold hands is less than ideal, tactically inefficient and possibly even dangerous.

There are ways of improving the situation, eg supplying canvas shelter as at No 10 or the erection of more bulletproof guard houses as elsewhere on the estate, offering (discreet) hot drinks on cold wet days, or supplying properly waterproof kit, including caps. And they should be supplied with waterproof gloves, not have to buy their own.

I have raised this within the Palace of Westminster with peers but have had little support for improvement. I can’t help but feel that if I were arguing for police horses or police dogs, they would not be left exposed to the weather like the officers.

I hope you can do something quickly before the weather gets worse again.